I recently sat down to work on another draft of a script. I had an idea for a new character, a professional mentor for my protagonist, someone who was really in his corner. And the kicker was, right when the going got tough, she would die, leaving our hero on his own. It’s a pretty standard movie trope (Obi-Wan Kenobi, Vitruvius, Mufasa), but I ultimately decided against it.

The problem is, it would have required me adding three more characters: the mentor, who was our hero’s boss, the mentor’s replacement, and the person who would appoint the replacement. Yes, I would have gained something, but at what cost? Like the timeframe of your plot, which I discuss in my previous post, you want your script to achieve its goal with as few characters as necessary.

Aristotle didn’t discuss a “Unity of Character,” but Greek theater had other conventions to restrict the number of characters in a play. Unity of Action also implies some Unity of Character. In any event, Unity of Character or the “fewer the better” has become an unofficial rule of thumb for effective screenwriting.

To be clear, you want the worlds you create to feel authentic. Your protagonist needs a family, friends, neighbors, coworkers, cashiers, and bank tellers. But it’s going to be easier to create that realistic world inhabited by three-dimensional characters if you have fewer, not more characters.

There’s a basic math problem. With any script, you’ve only got so much screen time. Do you want it to go to your main characters or a bunch of walk-on roles? Let me illustrate my point with two pictures of Amy Adams.

The first is an absolutely enchanting photo of Amy staring dreamily into space. 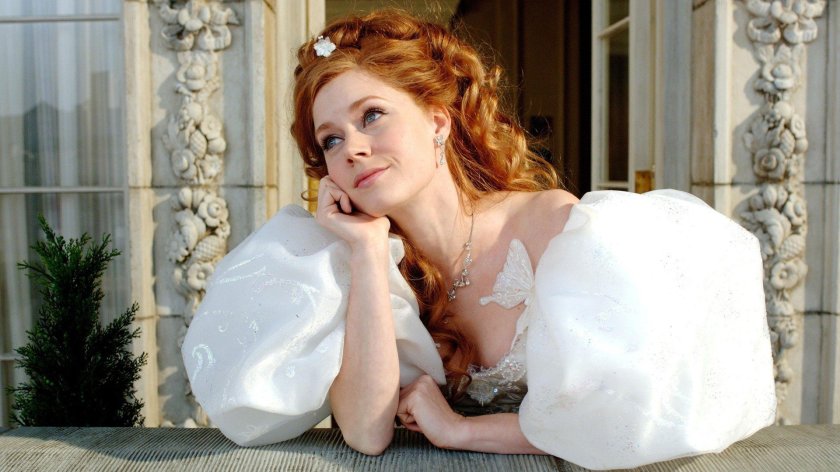 Then we have a shot of her in the background(?!), out of focus, crowded out by extras, and upstaged by a bunch of Muppets!

Both pictures are the same size. One is a great photo of Amy Adams. In the other, you can barely see her. Fewer characters means more screen time for your lead roles.

The problem isn’t so much with secondary characters (the best friend, the love interest) or tertiary characters (the boss, the comic relief), but with bit parts (the valet, the cashier, the security guard). How important is the line, “Here’s your receipt. Have a nice day.” or “Place all metallic items in the plastic dish.”? Blake Snyder calls this “place holder” or “Hi how are you I’m fine” dialogue. It’s the kind of thing anyone can say, and it contributes nothing to the story. Unless the receipt or the items going through the metal detector are critical to the plot, you don’t need to mention them. What if your security guard has some critical piece of information to deliver to your hero? Consider giving that line to a more important character. It gives them more screen time and makes them more integral to the plot.

Fewer characters makes the writing and acting better as well. Say your valet has one line. “Your car is ready, Mr. Anderson.” How do they deliver it? Earnestly? Concerned? Full of contempt? Deferentially? What kind of valet is this? A kindly old man who loves cars? A college kid with a summer job? An undercover secret agent?

The thing is, if your actor imbues this character with any personality, it will detract from the scene. The movie is not about them! But why would you write a character who you want to be as bland and forgettable as possible?

“But my protagonist is a rich snob who always stiffs the valet!” you’re saying. “I need that dialogue.”

Aha! Well, in this case, your “bit part” has a bigger role to play in your story. The way your protagonist treats your valet is a defining character trait. Gauging this interaction throughout the course of the script will show the audience how your protagonist has changed. Is he still stiffing the valet in the middle of the script? What about when the love interest is present? How does he treat the valet at the end?

Now that your valet has three or four scenes, it’s no longer a bit part. You have the opportunity to give him some personality. Maybe he even plays a role in your protagonist’s journey. Either way, the actor has something to work with, and your world is going to feel a little more realistic.

For your script, you’ll have to make your own judgment call. But remember, fewer characters means more screen time for the characters who matter. It’s going to make a more realistic world and engaging story. When it comes to good screenwriting, there are no small parts, only poorly written walk-on roles.