The vast majority of jobs in the film industry are freelance. That means you, as an employee, are only hired per assignment (commercial, TV episode, feature film, mayonnaise training video…). Technically, you work for Paramount or Fox or Comcast NBCUniversal, but only for a few days at a time. The closest comparable thing in the “real world” is an independent contractor. These people own their own businesses and enter into negotiations directly with a client. Roofers, plumbers, electricians, etc. are all often independent contractors.

There is a slight difference, however. Freelancers are technically employed by a company (just for a few days at a time). If an independent roofer falls off of your roof, he’s the one paying the hospital bill. If you fall off of a roof making a commercial, the production company’s stuck with the bill. While it leads to countless jokes and is confusing to literally everyone, freelancing is a distinct form of employment that affects things like filing taxes, applying for loans, and unemployment compensation. (For example, when a project ends, you no longer work for Paramount Pictures, but you weren’t fired.)

Supposedly, the term “free lance” comes from the Middle Ages when unemployed knights would hire themselves out as private ruffians. They were literally “free lances” AKA mercenaries. And that’s probably the most accurate description of what we do.

So what does the world of freelancing look like? Well, here are a few thoughts.

People will sometimes describe freelancing as being your own boss. That’s patently false. As a crewmember, your department head is your boss. Even as a department head, the producer or director is your boss. And if you’re in a lucky enough position to be a director, art director, or even producer, the client is your boss. Point is, once you get into the trenches, there will always be someone above you telling you how to screw up your job. Negotiating these conversations (using your skills and experience to achieve what your boss wants) is one of the freelancer’s most critical assets.

The Schedule from Hell

Can you set your own hours as a freelancer? Definitely not. As with your boss, once you sign up for a project, your time is at the mercy of the production company (or client). Working a one day job? Production doesn’t care if they go for eighteen hours because they only need you for one day. You, however, may have another job tomorrow. And if you do have something to do, it’s incumbent on you to find out if your shoot will go for eighteen hours (production will often give you bad information) and have your own contingency plan. (Keep a babysitter on hold, notify tomorrow’s production manager you may be late/exhausted, and sell your concert tickets.) Again, once the job starts, you’re in it for the long haul.

If there’s an act of God (inclement weather, a location falls through, an actor is taken hostage by the mob…) your job may push. Producers understand that you may not be available when this happens, and they won’t hold it against you. But you won’t earn that paycheck…

And of course, once you buy tickets to a sporting event, schedule a vacation, or plan a date, you will inevitably get a call for the most exciting job of your life. My wife’s friends (who have filled in for me on many dates) have started subtly suggesting I purchase more tickets to the ballet.

The idea of being your own boss and creating your own schedule originates from the idea of that you have a right of refusal. If you work for a normal company and your boss assigns you a shitty job, you can’t really get out of it without quitting. But if you’re a freelancer, you just don’t take the shitty job. Great in theory, doesn’t always work in practice.

For one thing, refusing a shitty job is contingent on whoever calls you for a job being honest about its shittiness. (Unlikely.) But questions like, “Who’s the director?” “How many locations are there?” “How many cameras are there?” and “Who’s the client?” can give you an idea of what the job will be like. (Pro Tip: If the person calling you can’t or doesn’t want to answer your questions, it’s probably a shitty job! I have also noticed that the number of phone calls and emails I receive before a job is directly proportional to how shitty a job will be. Sadly, at a certain point, it’s too late to back out.)

Then there are the market forces. A job you’d never take “in a million years” might not look that terrible in early January when you’ve drained your savings account over the holidays and haven’t been employed for three weeks.

Finally, if you turn someone down enough times, they’re going to stop calling you. That’s not always a bad thing. Some people just attract shitty jobs. But you never know who they’re going to talk to. It’s s small world and a smaller industry…

Rates are fairly standard by region and they tend to be higher for freelancers than full time employees. But part of the reason for that is, if you work for eighteen hours Monday, you’re probably not going to be working on Tuesday. It’s also important to clarify rates with new employers before you start. How is overtime calculated? When does it start? Are you paid for travel or mileage? Do you get a prep day? A wrap day? What about a kit rental? Depending on your department, this might be a slider, lights, lenses, filters, microphones, mixers, monitors, transmitters, tables and chairs, tents, props, or vehicles. Union crews don’t have to worry about this as much because everything is covered by a contract (except kit rentals), but it’s up to the crew to make sure the contract is followed.

Also, if you’re starting out, it’s a really bad idea to undercut other crewmember’s rates. It creates a race to the bottom, and you won’t make any friends. You’ll also quickly learn that you’d make more money at Starbucks.

On the plus side, rates are a good way to weed out some of those shitty jobs. For one thing, if a production manager offers you a shitty rate, it’s an indicator that a job will be staffed by inexperienced people with low standards. On the flip side, if you know this will be a shitty job, inflate your normal rate a little. If they say no, don’t take the job. If they say yes, hey, all least you have some extra cash for your pain and suffering.

If you read this post about taxes, you know what the bulk of freelancing paperwork entails. In addition to that, it’s entirely up to you to worry about heath care and retirement plans. If you get in a union, you’ll at least have a group plan, but you’ll still be amazed at the amount of paperwork required to maintain it. And sadly, there’s no H.R. office down the hall that you can visit on your lunch break.

It’s hard to talk about the film industry without bringing up Harvey Weinstein. With big personalities, small crews, and offices that constantly change locations and bank accounts, it’s not surprising that the film industry is a high-risk occupation for sexual harassment. The past few months have shown that men are pigs in all industries, but the film industry has no overarching governing body to enforce best practices. All of the unequal power dynamics that existed before Harvey was outed still exist today. Sadly, it’s up to you to look out for yourself.

Depending on what you want to do, you don’t really have a choice. When you envision a film crew on the sidewalk, everyone (grips, gaffers, sound mixers, PAs, etc.) is freelancing. Most scripted TV employs freelancers, but shows with permanent sets (talk shows, game shows, late night shows, multi-camera sitcoms) will have a full-time staff. If you want a full time position, you need to find a brick and mortar studio with an open position. But recognize that it is your workplace and job description from there on out.

The real perk to freelancing is the variety of jobs, people, and places you get to experience. For some personality types, it’s the only way to live. But it is a lifestyle choice more than a job description. Hopefully this post gives you some good food for thought before you join the circus.

The majority of freelance work comes through recommendations. And freelancers get it. If someone asks you for a resume it’ll look pretty weird (usually just a list of credits). 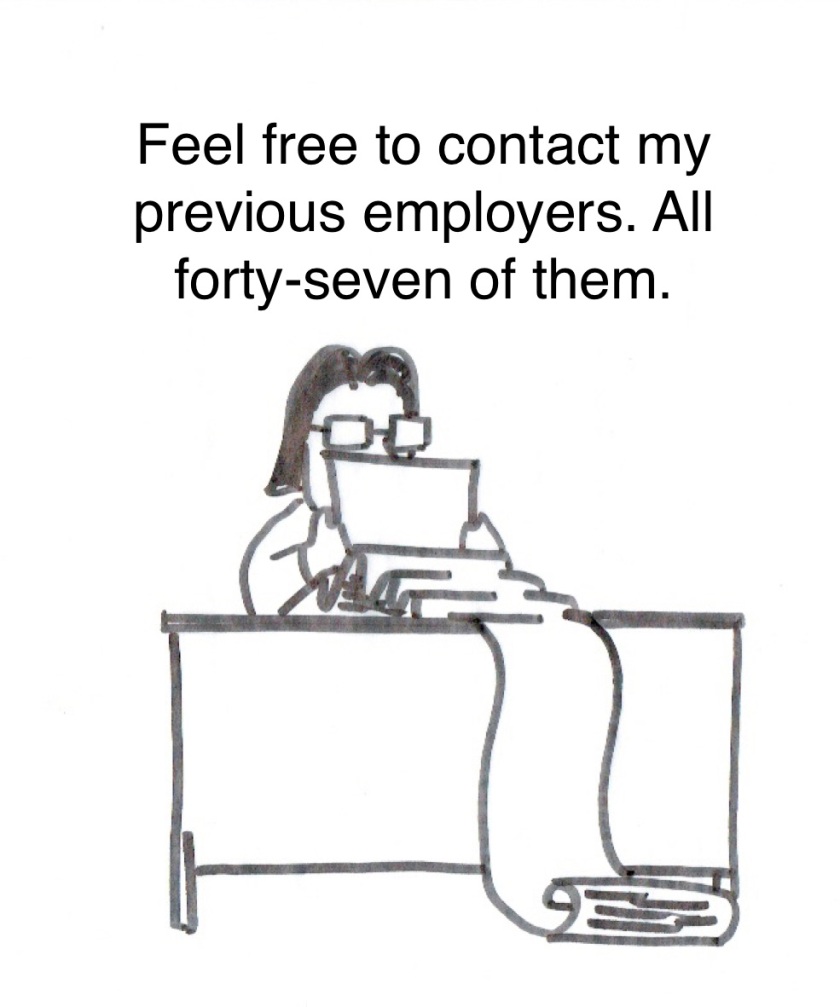 But if you apply for a “real” job after freelancing, you’ve got your work cut out for you. For one thing, most people don’t understand what freelancing is (a euphemism for unemployment?). And most jobs now require you to submit resume information online. How do you type in your employee history when you’ve had twenty-five employers in the last year? It’s not fun (though it’s not impossible). I highly recommend taking a resume writing or career-coaching course if you do go in that direction.