When all of the credits fly by at the end of a movie, “grip” tops the list of titles that keep people scratching their heads. What is a grip? What does a grip do? (Insert any number of punch lines here.) Grips have a wide range of responsibilities on set. Most of them involve lifting heavy things (sand bags, steel pipe, stands, cameras, plywood, lights, weights…) so these are some of the toughest guys you’ll see on set. But gripping also requires a lot of problem solving and smart working (How do you minimize the amount of heavy things you have to lift?) so grips also need to be well versed in film equipment, knot tying, construction, and physics. When there’s a twenty pound light swaying in the breeze above your actor’s head, you want to be sure the guy that put it there knows what he’s doing. So what exactly is a grip?

Gripping is essentially attaching things to other things: attaching a camera to a dolly, a clamp to a pipe, a flag to a stand, a stand to a condor, or, like in this picture below, attaching some transmitters to a Ferrari. 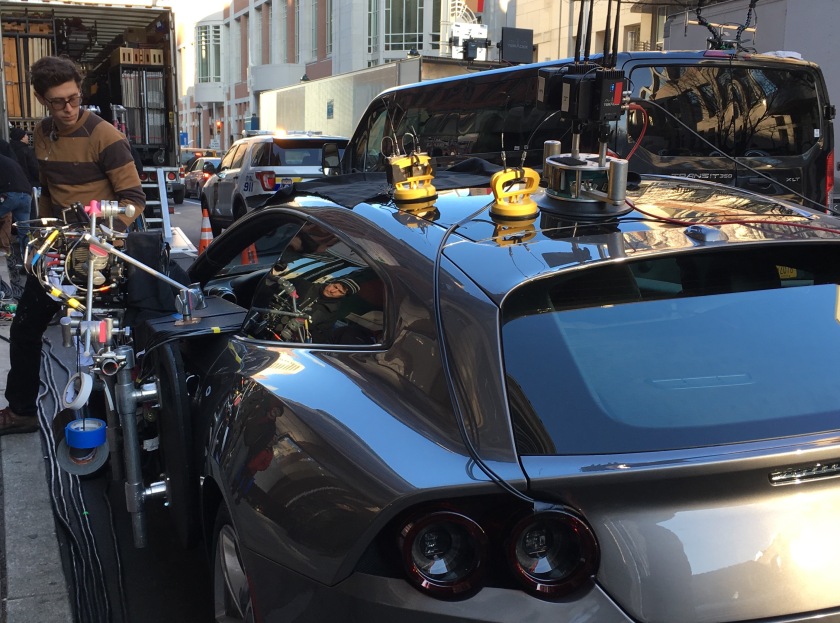 Although it’s a little hard to see, the camera is on the left of the car, outside the driver’s window on what’s called a “hostess tray.” The grips are using speed rail and short arms to secure it. Look at that nice sturdy triangle they’re building!

Grips use a wide variety of clamps, special film equipment (Cardellinis, cheeseboros, apple boxes, elephant ears, ducks bills, etc.), rope, ratchet straps, screws, and tape to make this happen. Of course, you want to be sure you’re using a nice soft suction cup (not a screw gun) on the Ferrari. You’ll also need to be sure the suction cup is strong enough. How heavy is the transmitter? How much wind resistance will it create? How fast is the car going? Some jobs require impromptu carpentry, building platforms for gear or people.

Once the gear is set, it also needs to be secured with ropes or safety chains. Anything that creates a lever needs to be counterbalanced with weights. Stands need to be weighed down with sandbags. And that brings us to the grip department’s second, but perhaps more important job.

Because of all of the heavy things grips schlep around, they’re in charge of safety on set. Obviously they need to make sure all of the lights and cameras are safe. (Will the camera fly off that Ferrari and hit someone? What about the antennas on the transmitter? How secure are they? Did someone remember to remove the tape rolls from the hostess tray?) But because of that, they take on a broader safety roll.

Are there fire extinguishers and fire lanes on your set? Is it too windy for the camera operator to go on the roof? Is the road closed to traffic? Does everyone working on the boat have a life vest? And while different people have different responsibilities when it comes to safety, it’s ultimately up to the key grip (the head of the grip department) to make sure you have a safe film set. And if he says, “That’s unsafe, we’re not doing it,” well, that’s that.

A grip once explained his job to me this way. The electric department adds light. We take it away. Apart from all of the other things grips are responsible for, they also use a wide variety of flags, nets, and diffusion to control the light the electric department throws around on set. When you see behind the scenes photos, that’s what all of the random stands are for. 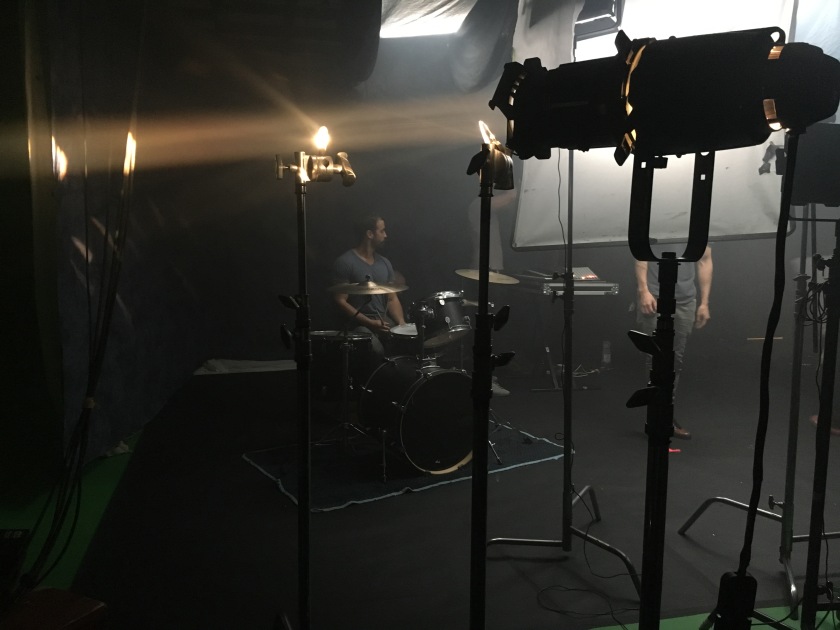 Grips are extra busy on outdoor shoots. When you’re on a set, the electric department shows some restraint in adding light. Cable is pretty heavy, after all. The sun? Not so much. Here’s a “flyswatter.” 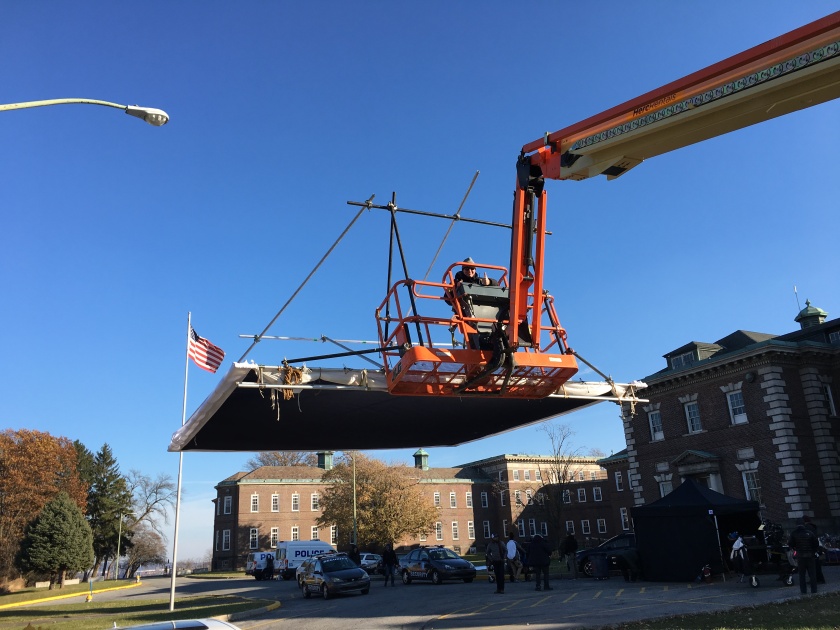 We started filming a scene in a cloudy parking lot, but had several days of work. Eventually the sun came out. No worries, grip department to the rescue. The flyswatter is your custom built, movable cloud. (The “boom lift” or “JLG” brand name lift that the flyswatter is attached to is commonly called a “condor” on film sets.)

Grips are also the only people who aren’t in the camera department that can actually control a shot. While the camera operator is in charge of panning and tilting, the dolly grip pushes the dolly that the camera is sitting on. It’s up to him (or her, I know some great dolly grips who are women) to get the speed right. In the below photo, the dolly grip is on the far left, pushing the camera. 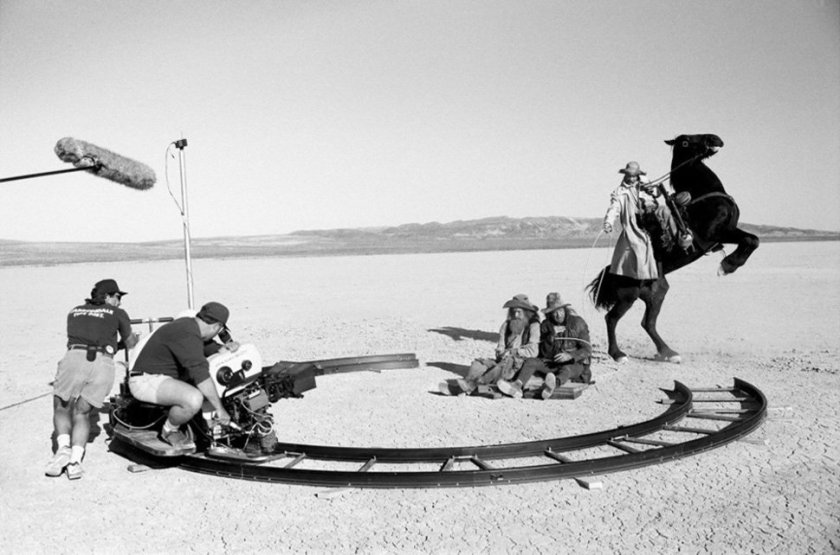 Cranes and booms, which may also be built on dolly track, may require the whole department to lend a hand. Pretty neat stuff. 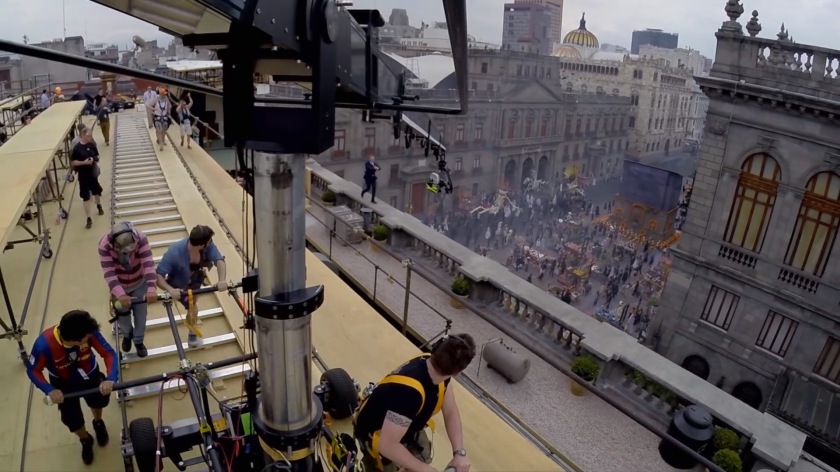 On the last feature I worked on, I had the good fortune to work with the rigging grips. We would show up before the shooting crew to set up larger rigging projects that may take hours or days to finish. The flyswatter was one of our projects. Here is another. 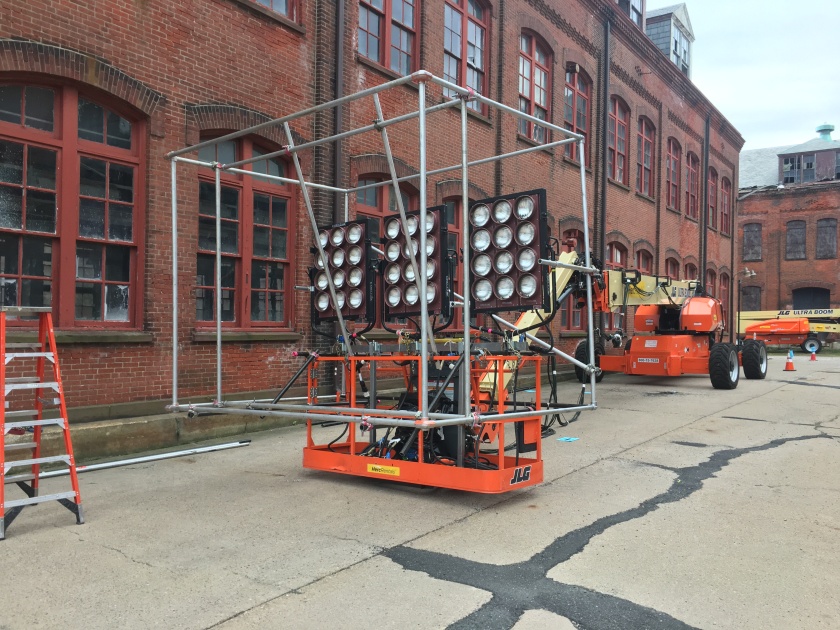 The electric department placed several lights on the condor. We built the box around them out of speed rail (1.5 inch diameter aluminum pipe). Although steel is stronger, you don’t want to put all of that weight eighty feet in the air. We ultimately covered the frame with blackout cloth and put diffusion on the front creating a very large, very powerful spotlight.

Film crews often black out windows so they can control the quality of light, no matter what time of day it is. Here is a tent we built over a sunroof. First the frame, then with the sides. 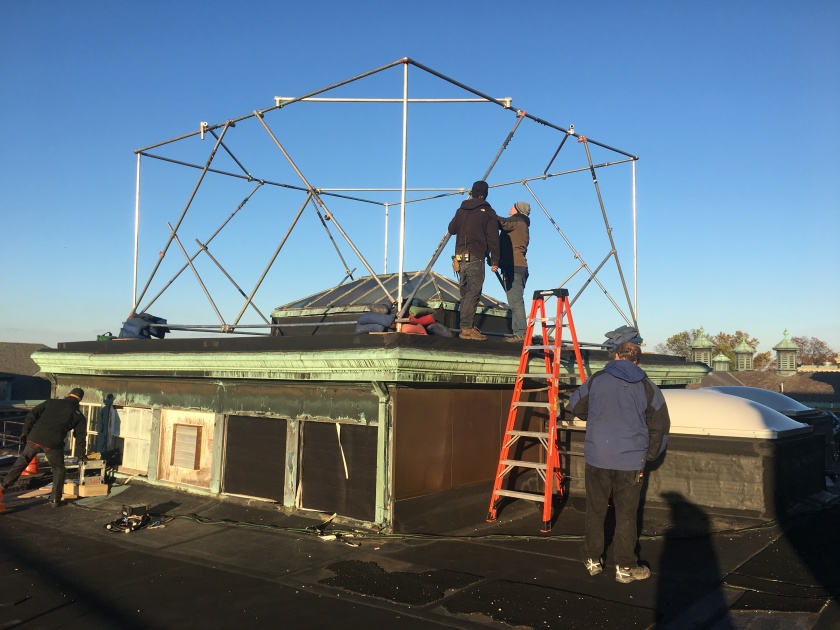 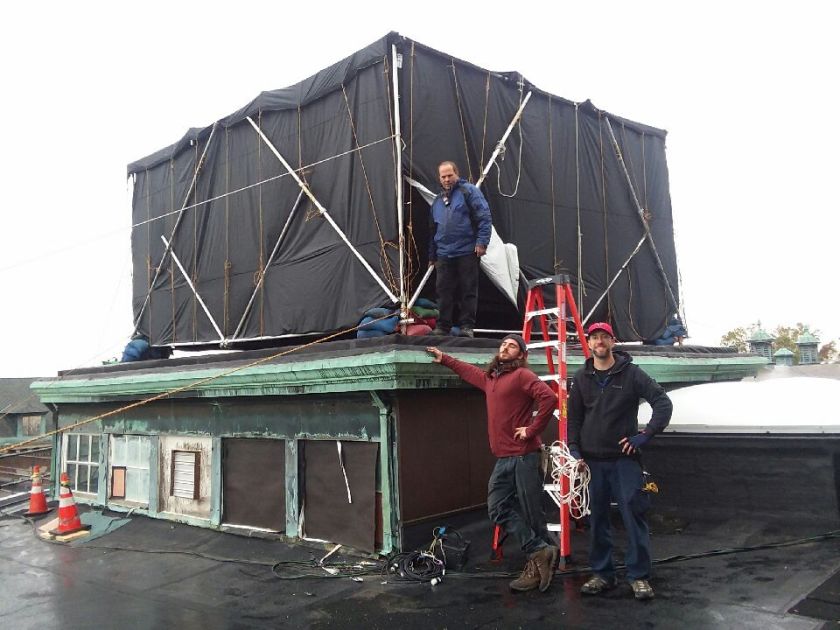 Wind was a major concern. You can see the copious number of sandbags weighing down the corners as well as the hemp safety lines.

Another fun project was blacking out or tenting the entire side of a building. Here’s a time lapse of us removing the tents after the location had been wrapped. For perspective, each of those pipes is twenty feet high.

Another fun project was building this scaffolding on the stage. We used it to throw stuntmen out of a third story window. 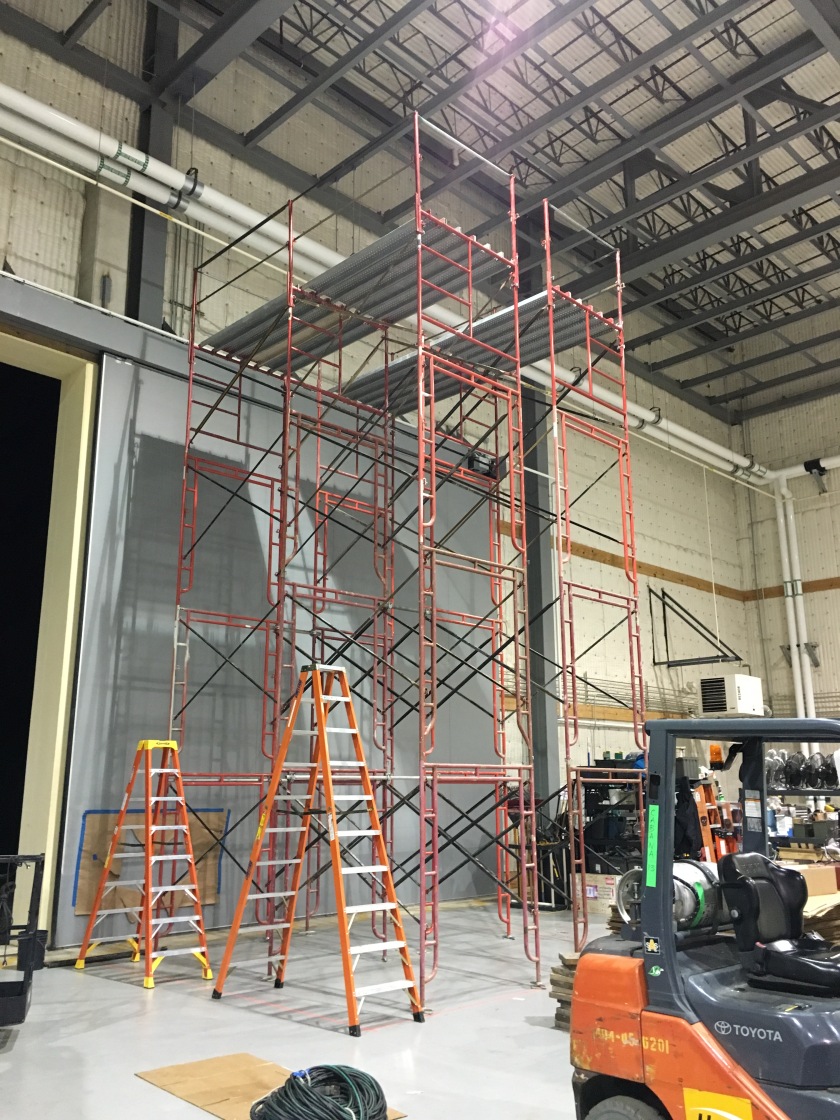 Here’s the same scaffolding after we covered it with green fabric. That allows the visual effects department to match it to the actual location even though we filmed it in a studio. 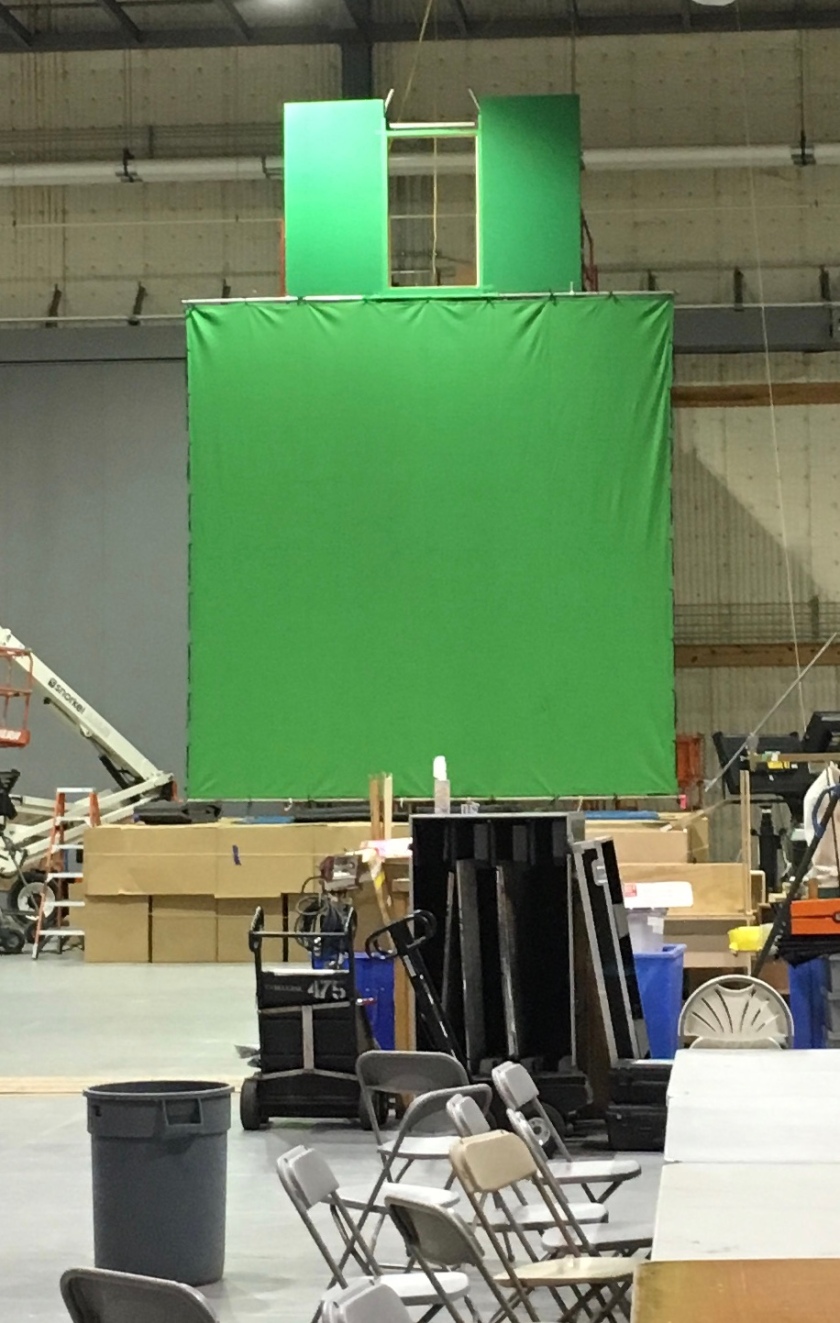 Here’s an electric car known as the “big rig.” 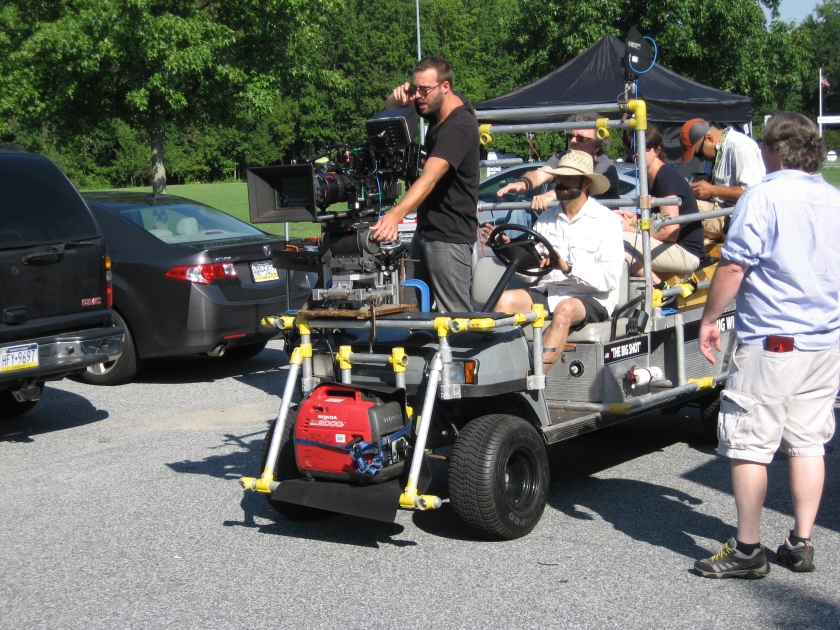 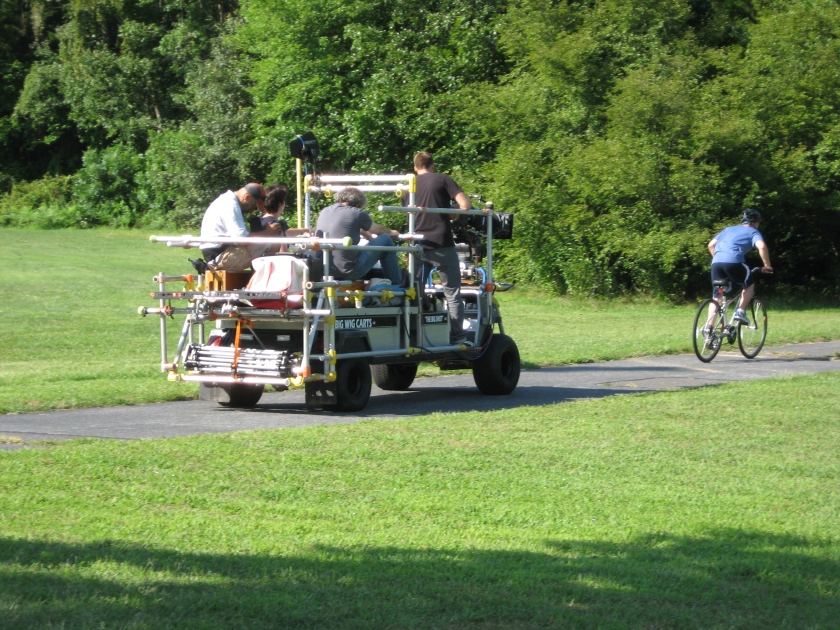 Here’s another fancy car setup for filming vehicles racing down the road. 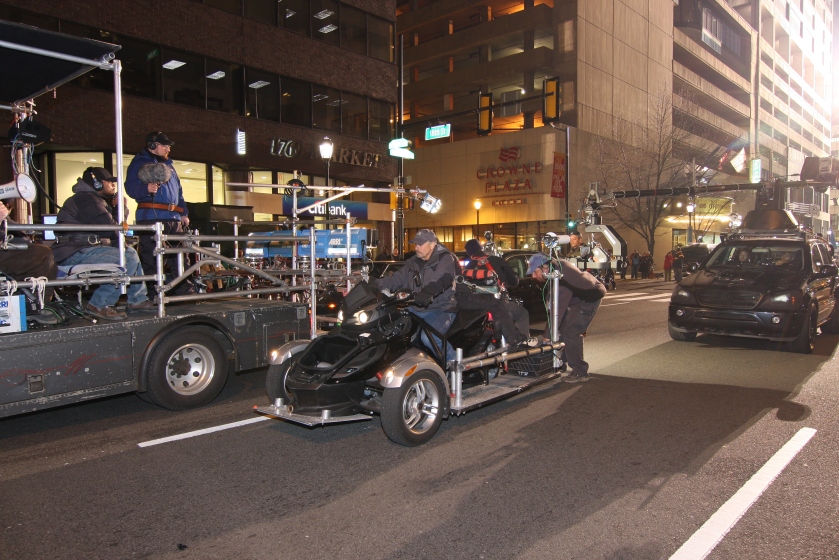 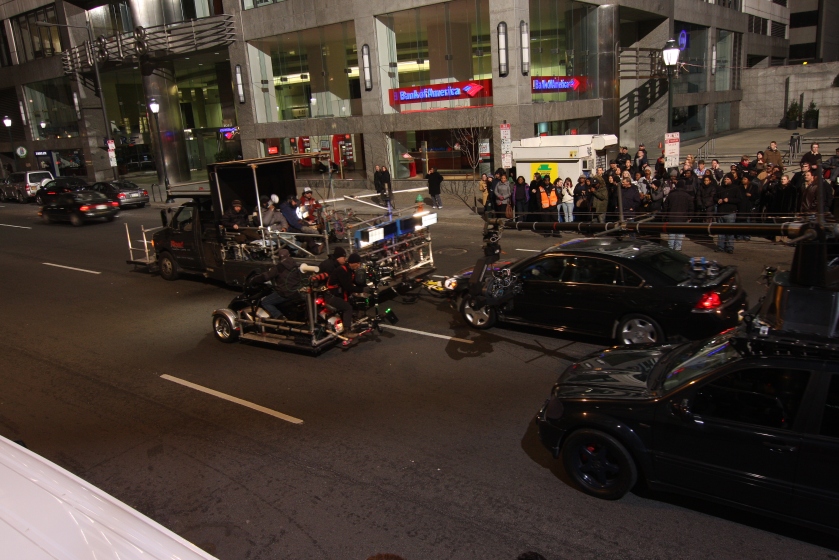 The director and the support crew sat on the back of the pickup truck. The truck lights the driver and passenger for the scene and pulls the sedan. Again, these vehicles show up to set completely empty. All of the “gak” (that’s a technical term for stuff) was secured in place by the grip department. That’s some serious gripping.

So the next time you want to build a pretty awesome looking fort, blot out the sun, or safely race around the street on the back of a truck, get a grip.

One thought on “Get a Grip!”